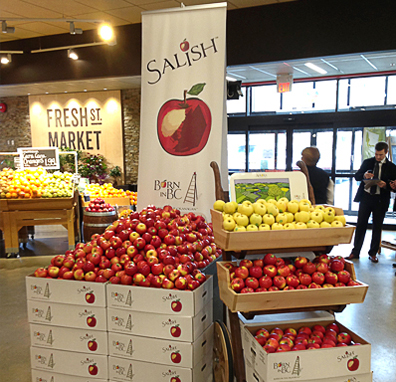 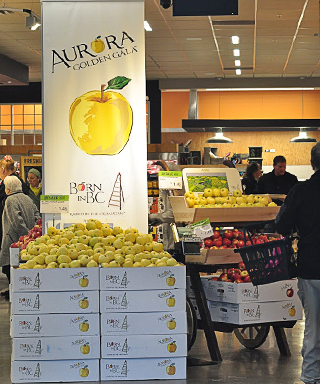 Born in BC. Raised in the Okanagan

“Born in BC. Raised in the Okanagan” branding was created by a small group of Okanagan orchardists who grow new apple varieties developed by the breeding program in Summerland, BC. These apples are grown as limited quantities of premium fruit that are carefully handpicked and specially packed in small facilities. Only the best of these apples are delivered to stores – mainly in the Vancouver marketplace.

Aurora Golden Gala and Salish were the first two apples to be distributed and marketed under the “Born in BC. Raised in the Okanagan” branding. Nicola was added several years later. These apple varieties are easily identified by the “Born in BC” display cases with the apple logo endorsing their superior quality.

Salish™ was born of the Okanagan apple-breeding program and named in honour of the Salish language of the Thompson, Okanagan-Colville, and Shuswap. The apple is recognized by its bi-coloured skin or cherry-red blush over a yellow base.

Salish is a medium sized apple with thin skin. Its juicy flesh is aromatic and tangy with a crisp, firm texture.

More than 25 years in the making, the Aurora Golden Gala is a beautiful, luminescent apple. It is the result of a cross-pollination in the early 1980’s between Splendour and Gala.

Aurora Golden Gala is a completely Canadian, non-genetically modified and absolutely delicious apple because of its sweet, juicy crispness. And, best of all, it maintains its wonderful flavour and texture even after six months in storage.

Aurora Golden Gala was consistently rated as the #1 apple at the UBC Apple Festival.

Nicola is another tasty product of the Summerland apple breeding program. It is a legitimate addition to the “Born in BC” family because it is a full sibling to Salish and Aurora Golden Gala; in other words, it, too, is a cross between Splendour and Gala. Nicola was originally planted throughout the Okanagan Valley, but because the trees can only be grown in certain areas, the variety is best sold as a boutique apple. The “Born in BC” program ensures that this apple will arrive to you, the consumer, as the amazing apple that it is.

Nicola is large, sweet and crisp with a full-bodied taste. It has a cherry red blush over a greenish yellow background and a distinctive long, elegant, and highly flexible stem.

Don’t be fooled in to thinking that Nicola is best when freshly picked from the tree because the apples actually taste better with storage. So throw this one in your fridge and enjoy it for months.